They say it's a home

As if it had always been there, in synergy with the sky, sun, olive trees, agave plants and vineyards, Radun Home creates a sweet stay, full of Mediterranean harmony. Incorporated in charming landscape with minimal architectural interventions, Radun Home stays friends with nature and has everything for a custom-tailored vacation.

The conceptual creators of Radun Home project are in love, not only with each other, but also with Croatia and travelling. It is the experiences from their travels, the good and the bad ones, that helped them create the most beautiful, cozy, authentic, tasteful and fun vacation for you, your family and friends. Although they have traveled around the globe, their home is where their hearts are – and that is Radun Home! They will do their best to make it your dream home too!

Radun Home is built in reduced, minimalistic style, stripped down to its essential quality in order to blend with nature around it. Radun Home consists of a main house and a guests house.

The main house has 4 spacious bedrooms, 3 bathrooms, a kitchen, a dining room, a living room, a patio with an outdoor kitchen and a swimming pool.

Every element of the house is part of a harmonious ensemble. The master bedroom opens up to the patio, which is separated from the rest of the Home. It is designed to be your peaceful oasis when you need some time alone, because we all do sometimes.

The Living room and dining room feature floor-to-ceiling windows, with a Mediterranean garden on the north and a spacious patio on the southern side. It is intended to harmoniously blend with the comfort of home and nature.

The space is carefully designed for pleasant family reunions by the fireplace in autumn and winter time. There is always a pleasant cool breeze up here that will cool you down just a notch when you return from the beach or a day trip in the late afternoon. 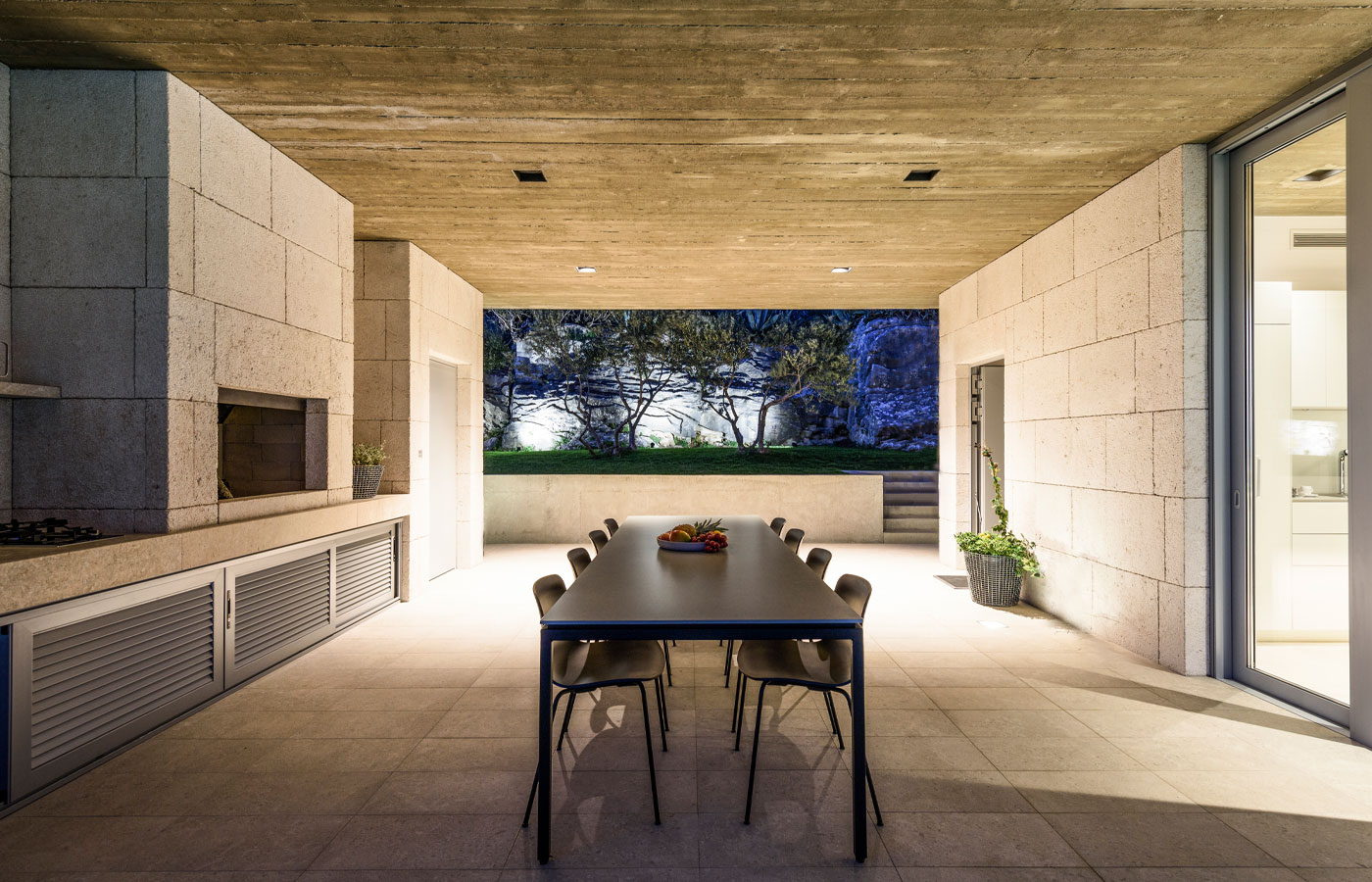 In the outdoor kitchen, at any season of the year, you are welcome to prepare famous Dalmatian dishes such as “peka” or “pašticada”, make barbecue or cook macaroni and cheese for the children.

The patio features spectacular views from left to right all the way into the horizon. It will be your favourite spot to soak up the sun, enjoy a good book or a cocktail or two, while admiring the most amazing sunsets.

Feel free to help yourselves to the produce from our Mediterranean garden surrounding the patio. We highly recommend rosemary – it will leave a taste of Dalmatia in your mouth.

The pool is 20m long by 5m wide and perfectly suitable for a solid workout. The view you will have doing it will relax you in any case. Moreover, the pool is heated during colder days. 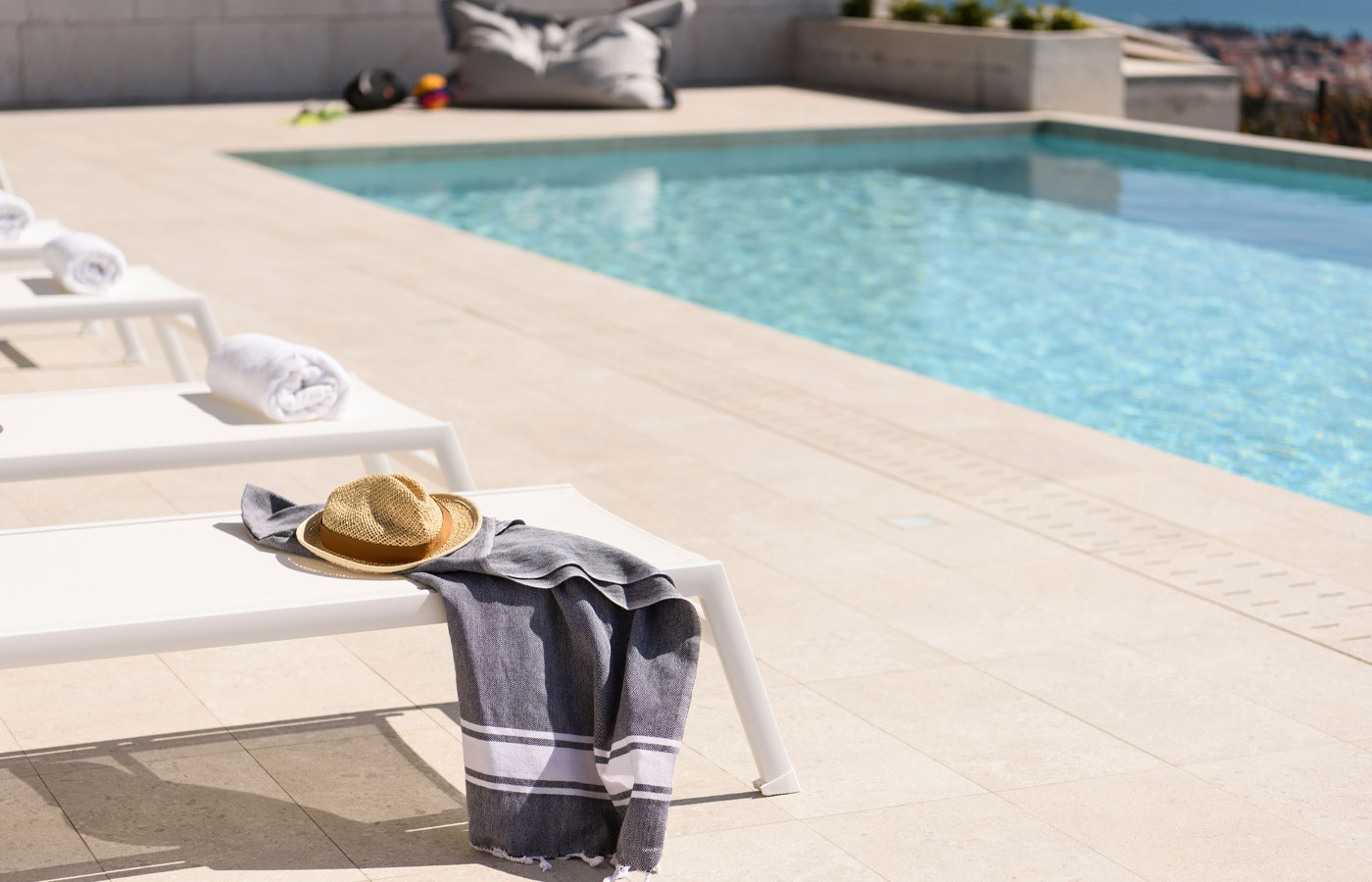 The In-floor heating system and fireplace Radun Home enjoyable at any time of the year. Mild temperatures in the winter and an extremely high number of sunny hours throughout the year make Dalmatia an ideal destination in any season.

The guest house located nearby and consists of 2 bedrooms, 1 bathroom, a living room and kitchen. You are most certainly welcome to use it as needed. 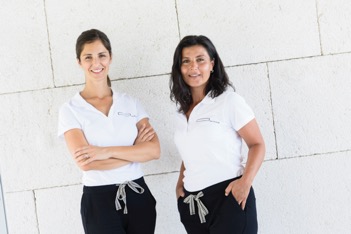 Our Radun Home team is at your service to make your stay here as carefree, comfortable and unforgettable as possible. You give us your ideas - we custom create a vacation for you. Additionally, we will provide you with fresh ideas or sprinkle yours with spices – Your wish is our joyful task!

Our team are carefully chosen local people with many years of experience in the tourism industry, who are also very knowledgeable about anything Dalmatia has to offer. They will make sure that you have everything you need, while respecting your peace and privacy.

From the moment you arrive at the airport you do not need to worry about anything. In case you arrive before check-in time, they will take care of your luggage and refreshments.
Furthermore, transfers to and from the airport, as well as daily housekeeping and Home pre-stocking, are also included in the price. 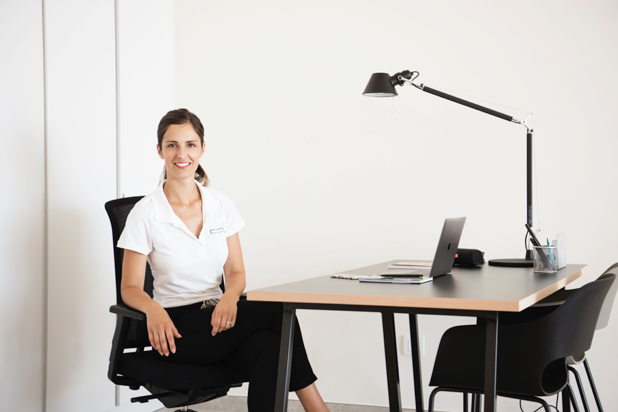 Nina in need is Nina indeed!
Our villa concierge, always ready and present for any help, at your disposal 24/7, that is our Nina. Her name is like a song, and so is cooperating with her. You will see when she contacts you prior your arrival to make sure you have all the necessary information. Furthermore, she will be at your daily service to help you with any requests or questions you might have. She will take you through any extra services that are available during your stay and give you the best inside tips on exploring the most popular sides of Dalmatia – just call out her name. :) 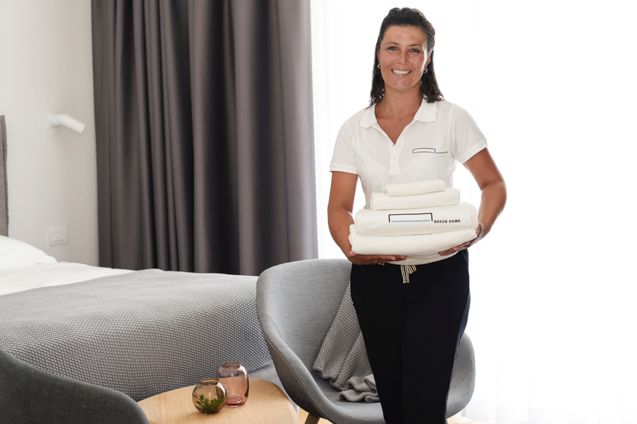 Ivana, our caring host, will make sure Radun Home is always impeccably clean. To make your dreams sweeter, your bed linens will be changed weekly or should you so wish, on a daily basis. Additionally, fresh towels will be in the bathroom every morning. Upon agreement, she is available for washing and ironing clothes as well.
Ivana is a great cook and she would love to help you prepare breakfast to fuel you with energy for your adventures, or to simply enjoy your peaceful day - whatever your needs and preferences are.

Weather you want a peaceful oasis or an adventure, Radun Home is the place to be! Most importantly, everything is close at hand. You will be nearby everything Dalmatia has to offer and minutes away from immersing yourself in the Dalmatian unique way of living.

Radun Home is located at the foothills of Kozjak, remote from the busy urban area, yet steps away from exploring the Adriatic Riviera. It is just a 5min drive or a 20min walk to the center of Kastela. The 7 villages of Kastela can be seen from the Home as if they were on the palm of your hand. You are also able to see all the way to Split and the historic town Trogir, which are only a 25min drive away, should you want to explore them closer.

Radun Home’s climate is very specific, as in summer it is always a few degrees cooler up here than it is down closer to the coastline. You will enjoy this very much because the summers in Dalmatia can be very warm. 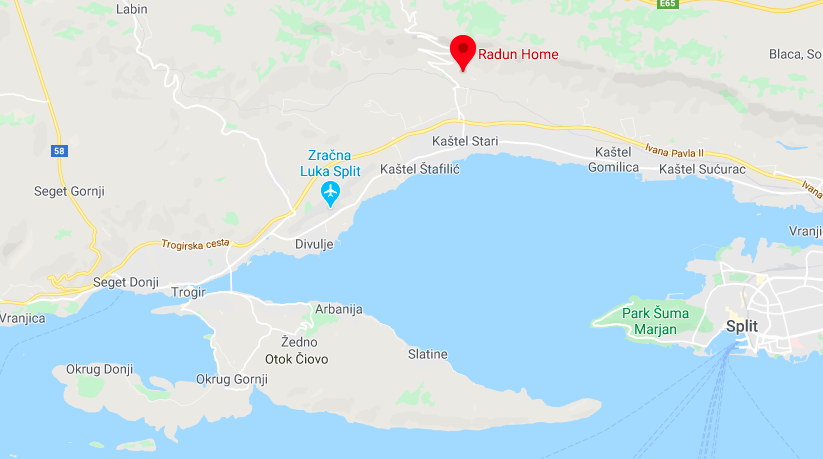 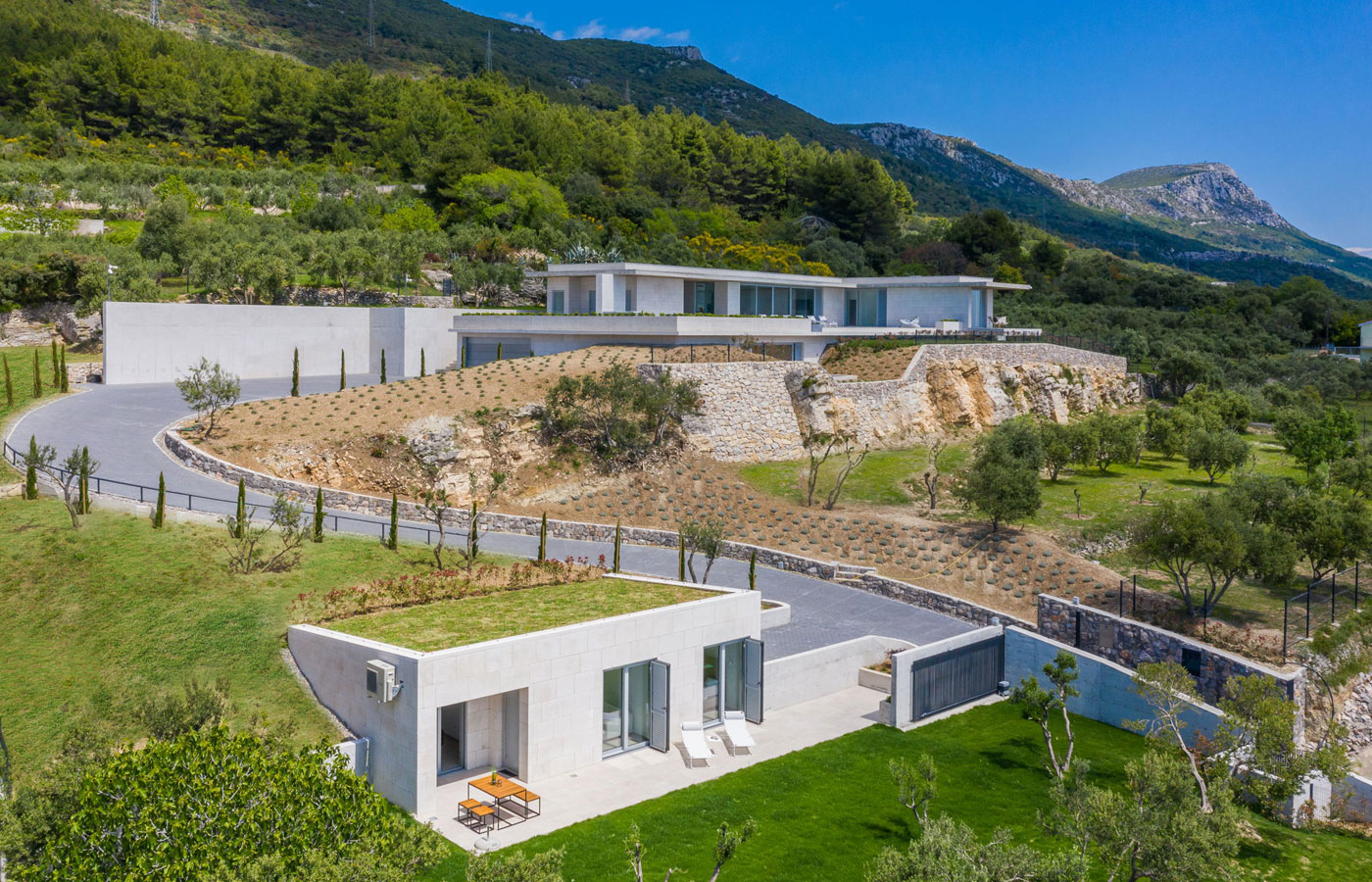 Radun Home is located in the middle of the most beautiful region of Croatia – Dalmatia! 5 kilometers away from the airport, on the upper edge of a seaside town called Kaštela. The name ‘Radun’ originates from an old Croatian village that existed here in the 11th century. If you are a history fan, you will be happy to know that one of the best-preserved pre Romanesque churches in Croatia, Church of St. Juraj, is located nearby, just a few minutes away. You will have centuries to explore as you go further. 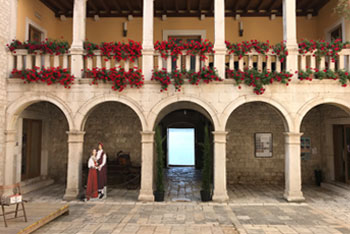 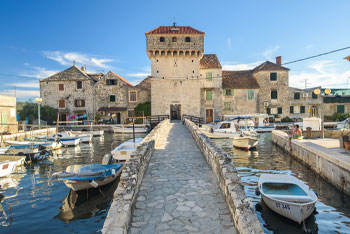 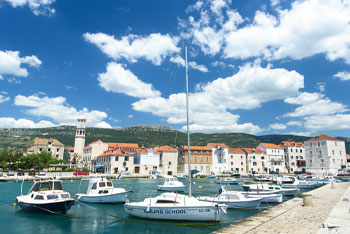 The Seven pearls that make up one town – each one with a castle from the 15th and 16th century from which the town started blooming. Hence the name - Seven Castels. Kaštela is not a typical town. All seven villages are as raw as they were in the past, not too ‘touristy’, even though Kaštela is 2nd biggest town in the Split Dalmatian County.

The history goes way back, and there are artifacts witnessing that (Sikuli, Kaštel Štafilić), Neanderthal remains Mujina Pećina, drywalls of archaeological site Biranj, dating from prehistory, or a natural monument in an olive tree that is more than 1500 years old. All of this, and more, you can experience without any trouble.

FUN FACT - It is a well known fact that Dalmatians are a unique kind of people, but those that are from Kastela are of an even more specific kind. You will adapt just fine to their everyday life, since they like to ‘take it easy’ or ‘pomalo’ which is their favorite phrase. It is a fishermen’s town where you will not see many tourists, and that is the best way to experience all Dalamatia has to offer. Climb down from Radun Home and continue relaxing in native surroundings. 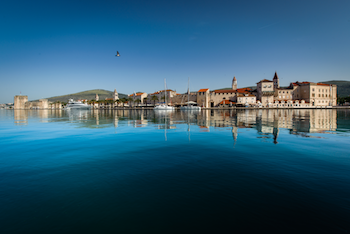 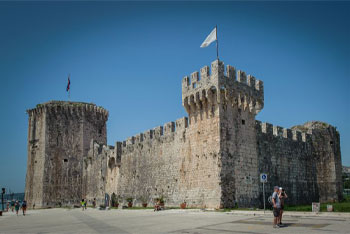 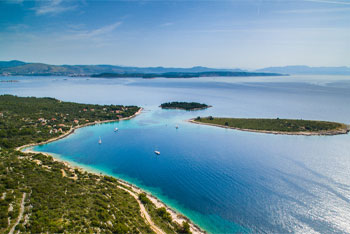 On the right side of the Radun Home patio, you are able to see Trogir, a historical and charming little town that is connected with island Čiovo by two bridges. It is small enough to go around in 45 minutes, but historically big enough to listen about for days.

The Cathedral of Saint Lawrence, a Roman Catholic triple-naved basilica constructed in Romanesque-Gothic in the 13th century dominates the town. The main entrance is a Romanesque portal, which is a monumental and unique work of a great Croatian artist called Radovan. On the coast of Trogir you will find Kamerlengo fortress, a magnificent castle from the 15th century. The core of Trogir is under protection of UNESCO. Take a stroll through its stone streets, and you will see why people call it “Little Venice”.

FUN FACT - Trogir is the first town in Europe to have a pharmacy. 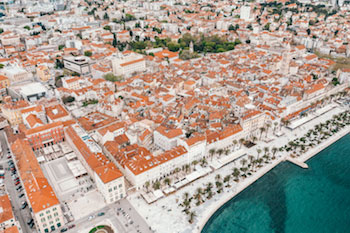 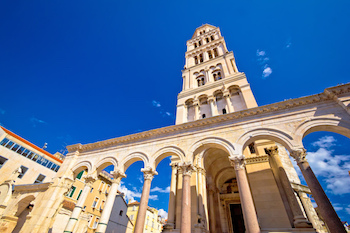 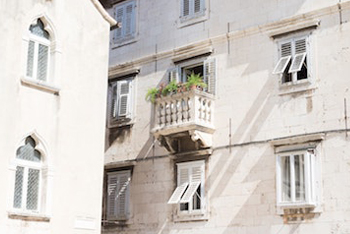 When you look to the left from the patio of the Home in the distance you can see Split. 1700 years ago, a Roman emperor Diokletian chose this place to build his mansion. That is the story of Diokletian’s Palace around which the second biggest city in Croatia has bloomed. Inside the Palace walls you will get to know life in this city. You can also take a walk on the famous promenade called Riva, which is bursting with life, restaurants and cafés. There is an old fish market where you can get fish from the Adriatic, as well as a market where you can purchase homemade vegetables to serve with the fish. You should definitely visit the top of the Saint Domnius bell tower, as this is a view you do not want to miss out on. Maybe, one of your wishes will come true in Split, if you touch the golden toe of Grgur Ninski. There are many restaurants in the charming, picturesque streets of the Palace that you will pass by. Do not hesitate to take a seat!

You can take a walk, or have a swim at Marjan peninsula, a forest oasis in the middle of the city. It offers the best view of Split, but you will have to earn it – 314 steps will take you there! From Split you can hop any Dalmatian island by boat or a ferry.

FUN FACT - people from Split love their town and they often say it is the most beautiful city in the world – are they being too confident? You have to see it for yourself! And if you are a Game of Thrones fan, you would be happy to know that parts of it were filmed in Split.